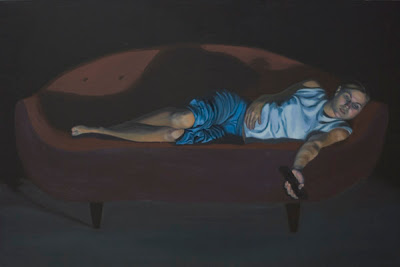 The few times I have been able to get into the studio lately, I have been working on the pants. They are really more complex than I thought they would be, and I've learned that even at this large scale I still need to get out my smallest round brushes to describe some of the edges and creases. Also, the lighting in this is very complicated and will take some very careful observation and color mixing to make work. Right now the pants seem a bit blue, but hopefully by the time I am done it will more appear that they are lit by a blue-toned light. It wouldn't seem that way right now since the flesh tones aren't very much influenced by that kind of light yet.

I did start a drawing last Sunday from a live model, but I'm not quite ready to post it. I spent most of my time just measuring, and at the end quickly tried to toss in some shading. I look forward to working on it again this weekend! It was a really nice class with Louis Copt and Anthony Benton Gude joining in to work from the model.

Speaking of classes, my figure painting class at ARTichokes in Leawood starts up this Thursday 10am-12pm! There's still time for you to sign-up or just come by Thursday morning ready to get to work.
Posted by Lacey at 8:45 PM