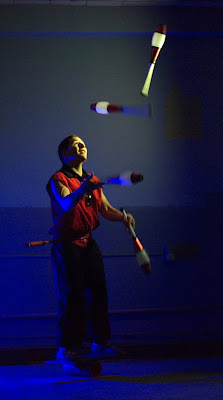 This week's open figure session is going to be super cool... talented performer Crazy Boy Coy will come in to both amaze and inspire us! Don't miss this one. Red Door Studios, 738 Armstrong Suite 200 in KCK 6-9pm. Just $10! 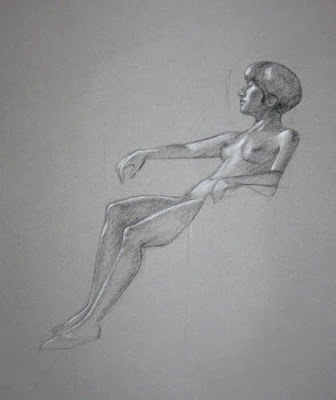 Also, this weekend my Beginning Figure Drawing Class begins. I can't wait! Meanwhile, I have been working away on some drawings, including a secret portrait commission and I had a lovely couple in the studio getting figure drawings done to commemorate their 20th anniversary. A couple paintings are also in the works, but more on those later.
Posted by Lacey at 7:44 AM No comments: 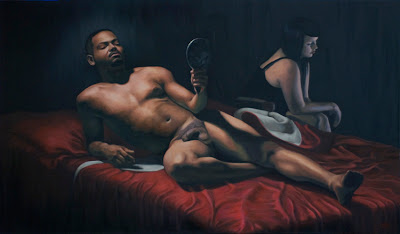 It looks like this painting is finally finished! I worked on it Monday and signed it, but I wanted to make sure I didn't immediately see something I wanted to go back in and change. That urge is not coming to me right now... perhaps in the near future I will see something and decide to make a small change, but for now I think it's done. :-) 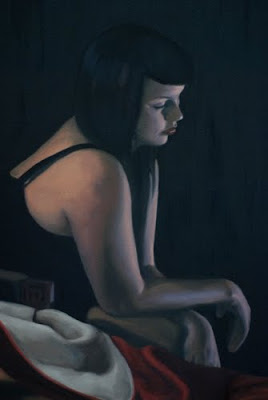 It took 2 days to convert all the video footage I had from the last time I made a video update in December. I didn't work on the painting at all in January or February, because of all that was going on, but I had done quite a bit of work in December and it was left with just a couple sessions of work to do. 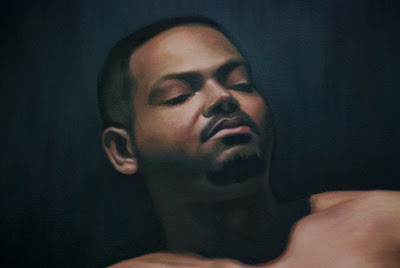 Hopefully soon I will have the last of the videos up, and then make one quick video of the entire process! For now, I am working on a secret pencil portrait commission, and getting started on some new work that I am pretty excited about.

P.S. The blue haze around the girl and the right side of the painting is not part of the painting, it's just the light from outside bouncing off the surface of the black paint on that side.
Posted by Lacey at 9:05 AM 2 comments: 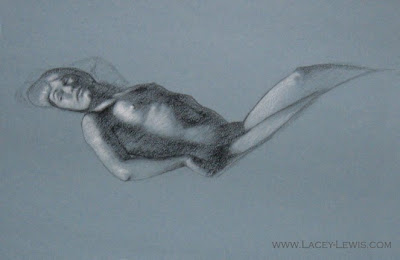 Last night's open figure session was *awesome!* We had an amazing model with lots of stamina. I needed a break before she did. She will pose for us next week, too, don't miss her! 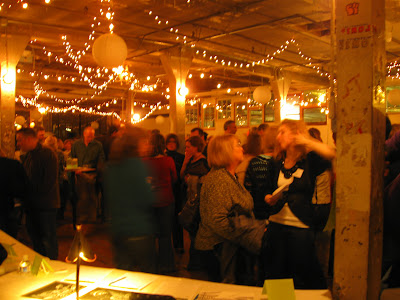 Friday night I participated in the Monster Drawing Rally at the Arts Incubator in KCMO. Had a great time, met a couple new artists and saw a couple old friends. Thanks to everyone who came out to support Hope House, and to the kind gentleman who bought my drawing in the silent auction! 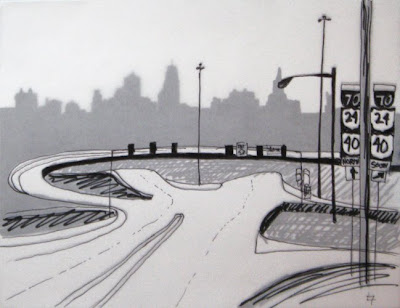 It's not my usual style, but I only had an hour. ;-) I had this idea to use both the bristol and the vellum they offered, using the transparency of the vellum to create a gray skyline in the background. I spent all my time working on that part, so the upper layer was a bit rushed. Had a great time though and worked outside my comfort zone!
Posted by Lacey at 9:04 AM No comments: 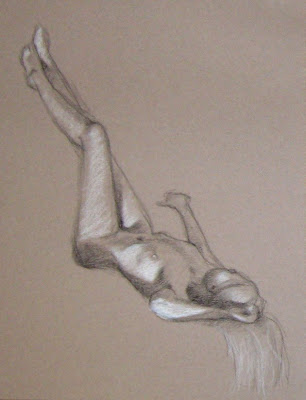 Hi All, I wanted to pass on the info for this class I have finally decided to hold. This class is perfect for beginners, yet I plan to keep it small enough that I can offer individual attention to help along more advanced students as well. In the meantime, don't forget Open Figure Session is ongoing every Saturday 6-9pm!

In this class, we will cover several different approaches to figure drawing, including gesture drawing and learning various ways to judge and measure proportion. Everything from properly setting up an easel to creating a pleasing and accurate contour will be covered. Anatomy, shading, and composition will also be explored. This is the perfect class for beginners with little to no experience as well as for artists looking to add to their knowledge.

Please email Lacey to sign-up for this class in advance. Students must register and pay in full by March 22nd to reserve their spot. All students will also be given a $5 discount on Open Figure Session Attendance for the duration of the 6 weeks.

I Finished a Painting! 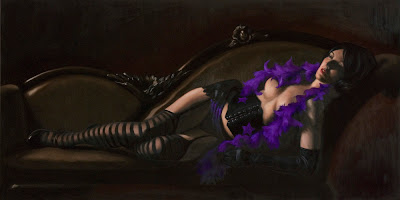 The other day I finished this painting! It was a commission for a private collector, so as soon as it is dry and ready for a varnish layer (there is a lot of sinking in and such that a varnish will take care of) it will be out the door and in its new home. My plan was to have this completed 4 weeks ago, but my father's passing changed those plans. The collector was empathetic, though, and imposed no deadline on me. I am so glad I had the extra time, because for a while it felt like I had forgotten how to paint!

Meanwhile, I've focused a little more on drawing and sketching. I have a pad at home to doodle in, and of course there are the Saturday sessions. Going forward, I want to continue more drawing, and am also looking forward to *finally* finishing up Vanity! I have some other painting ideas on the horizon, too. Getting back to work feels good.

Speaking of drawing, I am participating in Kansas City's Monster Drawing Rally this Friday night. Come by to see me draw and support Newhouse!
Posted by Lacey at 8:05 PM 1 comment: