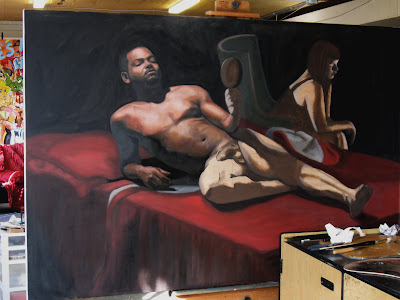 I've neglected to post progress of "Vanity" here. Sorry! I did post a video of the first stage on YouTube that can be found here. Above is what it looks like as of right now, and below is what it looked like at the end of the video. First I am trying to get the overall value and color pattern before moving in to lots of details. 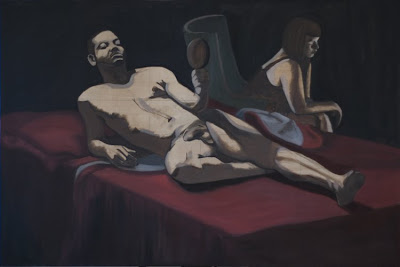 Tomorrow there's an open session at Red Door where a model will pose as the devil in celebration of Halloween! It's sure to be a lot of fun, and I think we will get some interesting work from that session. Check Red Door Studio's Facebook page for art created by attendees, more of which I will post soon! 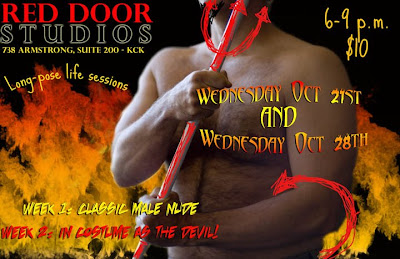 For November, we will change over to Saturdays for the open figure session. We will start with pink-maned model Ayako 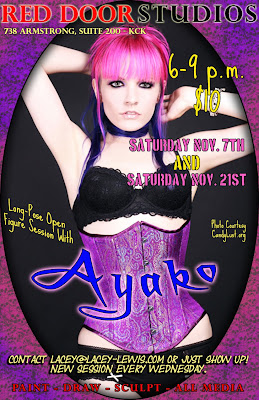 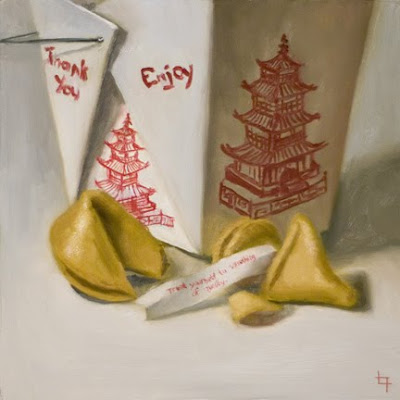 A couple nights ago, I painted another little painting involving fortune cookies. The fortune reads, "Treat yourself to something of quality." 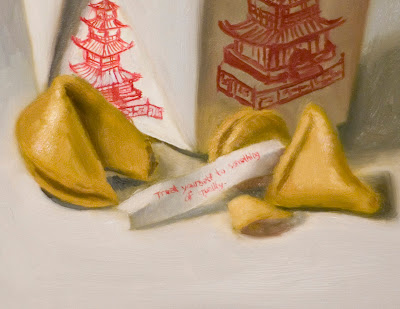 FYI: I've also started my next big sins painting in the studio, "Vanity." Once I get it to a certain stage, I will post the progress here.

Red Door Studio Events: Wednesday Figure Drawing and "Tales from the Art Side" 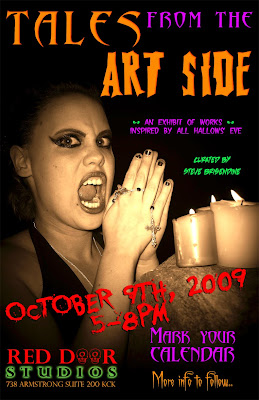 Tonight is the "Tales from the Art Side" exhibit at Red Door Studios! About 15 artists are exhibiting their scary work. Stop by (in costume if you have one!) and you might also be there for the Halloween costume fashion show with costumes from the KCK costume and party shop Have Guns Will Rent. They are locally owned and have everything you could need for a costume, party, play, etc! 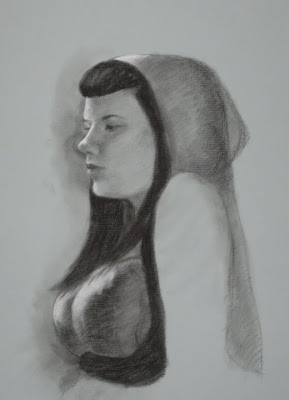 Speaking of costumes, don't forget about the Wednesday night open figure sessions. We often don't focus on the nude, but work with models in costume and with props. Last Wednesday our model came in a Little Red Riding Hood costume complete with a basket of apples! My drawing didn't show her entire costume or the props, but she was great and some excellent drawings were made that evening. Next week she will pose in WWII attire. Join us!
Posted by Lacey at 2:37 PM No comments: 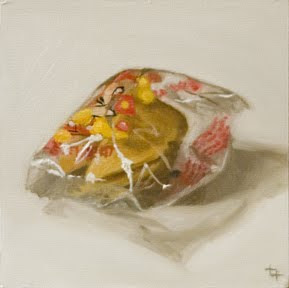 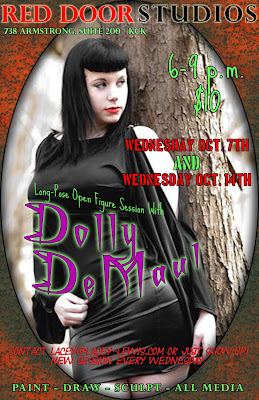 Don't forget Wednesday night open life sessions at Red Door Studios! For the next two week we will be working with Dolly DeMaul, and for the first week she will be dressed as Little Red Riding Hood. It's only $10 for 3 hours of long-pose life drawing 6-9pm. 738 Armstrong, Suite 200 in KCK behind the red door. (The door knob sticks sometimes, just come right in!)
Posted by Lacey at 9:54 AM No comments: 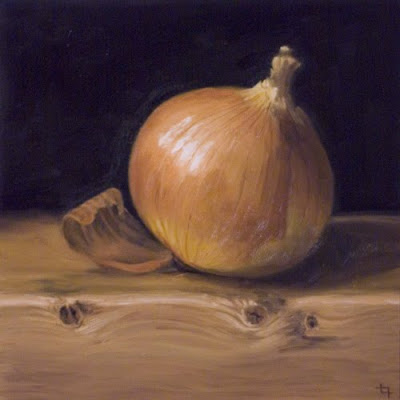 This Vidalia Ontion was completed a week ago, and has since been sent off to Strecker-Nelson Gallery in Manhattan, KS. They are having a show including 14 of my still life paintings and a small handful of more-recent figure paintings. The show opens this Friday with a reception from 5-8pm. 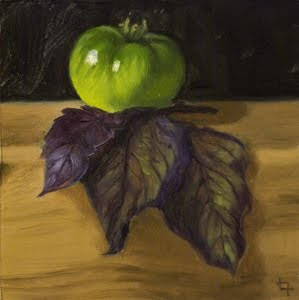 Above is another little painting I completed a couple nights ago. It's a very small green tomato with purple basil, two items that aren't the color they are supposed to be! As the weeks of the show go by, I plan to refresh the paintings on display at the gallery with new little paintings. My goal will be to have 2-3 new paintings per week.
Posted by Lacey at 9:49 AM No comments:

Some things I have been up to...

According to my blog posts, it seems like I am not doing much these days! However, a lot has been happening. Besides creating the little paintings, I've been doing quite a bit of work in the community. First off, check out the mural! This mural was sponsored by the Wizards and myself plus four other artists (Steve Curtis, photographer, Steve Larson, photographer, and Ron Smith, painter) designed and coordinated the completion of it. Much of the painting was done by the 5th graders at a nearby school and the Wizards players. My jobs were mainly to draw out the plan in the beginning, and get an outline on the wall for the soccer player.

This mural accomplishes several things. The area that we painted over had been tagged with graffiti several times and then covered with paint, though any blank wall will eventually be tagged again. Putting up an image that belongs to the community (since it was painted by the kids who live there) tends to at least move the graffiti to another location. The 5th graders who worked on this mural seemed very proud of what they were doing. I heard more than once kids discussing that they wanted to make sure no one would tag over their artwork! Finally, this gives artists a way to contribute their talents to create something that the community has pride in, and to hopefully leave an impression with the kids that we care about them and their community as a whole.

I've also just finished up teaching four weekly classes through a local non-profit to high school students who have been expelled from school for an extended period of time. Associated Youth Services focuses on helping these teens work through whatever problems caused them to be expelled from school, and then inspire them to have long-term goals where education is the focal point. Once a kid is kicked out of school for 100 days or more, it can be nearly impossible for them to step back in to high school since they have missed so much educationally while they were gone and it can be difficult to catch back up. AYS provides them with instruction while they are out of school so they can continue to earn credits and hopefully re-enter the school system successfully and with new goals and tools to help them stay out of trouble and on-path.

Often these teens have not been able to participate in any art classes, either because they spend so much time re-taking academic classes or because the schools they attend don't offer them. Often they feel as if they are not successful in anything they do. AYS partnered with Kaw Valley Arts and Humanities to create a program and apply for grant funding to get artists in the community to teach art to the kids at AYS. One of the main goals is to give these teens some feeling of success and accomplishment. Having just finished up my 4 week session with them (the program is continuing throughout the year with a new artist every 4 weeks!) I can say that working with these teens was one of the best things I have done as an artist! There is something about the age group that I click with, and the kids were surprisingly cooperative, plugged-in, and quickly understood all the material I threw at them. We covered 1, 2 and 3 point perspective mainly because one of the kids is interested in becoming an architect, but also because early on it was decided that they preferred working with rulers and vanishing points and creating their own world than simply drawing what they could see around them.

Finally, there's another group locally called Prep-KC that I highly suggest everyone get involved with. They place inner-city youth in high school with professionals in a variety of fields, where they students can job-shadow or intern or otherwise learn more about a job of interest to them. This helps give meaning to their daily education, since often these kids don't see people in their community with a variety of jobs and levels of education. I worked with some of these kids earlier in the year, and I hope to do so again in the future.

Artists: Please keep in mind that while some of this was volunteer work, some of it was also paid. I think as artists we can provide a lot to our community, and if we know how to advocate for ourselves we can also have our careers supported. It may not always be the wage we desire, but the more we get involved with the whole process, the more we can affect those aspects.