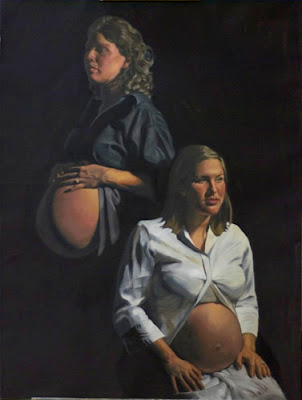 It's kind of a bummer that I haven't been able to update this blog more regularly. This is also reflective of my frustration with not being as productive in the painting department as I'd like. There's always something else that has to be done! I'm doing my best to clear my schedule this month and next, yet I still need to pay the bills. I've gotten a couple things out of the way, though. After this week I will have a vacation from private lessons during the work week, and I just delivered the final design for a children's CD I've been working on. I still have some classes and such going on, but I just might cancel all classes after the New Year. I desperately want more studio time!

Regardless, I have still made some progress. Since the last post about this painting, I've completely gone over both bellies, added some warmer, lighter pigments to the sitting woman's face, put another layer on her hands, and started on her clothing. You can see the difference in the white skirt, though I don't know if I will keep that the way it is. 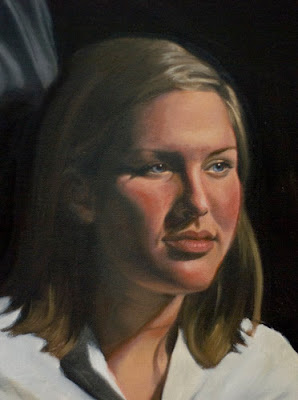 There's still so much to do. I almost want to cry I am so frustrated with the fact that this is taking so long. I wanted it done in November! I have other paintings to paint! Meanwhile, I still need to get curtains up at the studio since the sun this time of year is too direct... 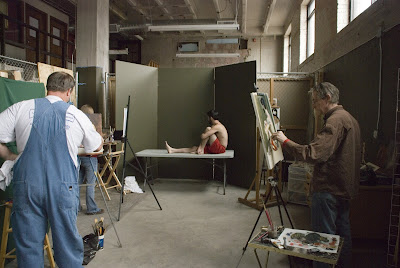 OK, enough of my pity-party! Last Saturday I held a figure painting class in my studio, and we will continue this through December. Today I moved my big canvas/supply holder, which is on the left with a green fabric draped over it, out of the way to hopefully accommodate everyone better. In the above picture, you can see my easel way in the background on the right.

I experimented with using color strings in my painting during this class. I pre-mixed a series of neutral grays, a flesh tone, and an earth red and yellow. There were certainly benefits to working this way, and I plan to actually tube color strings in the near future. I've been getting some of these ideas from a certain group and their application of the Munsell system, which is something I've been spending a lot of time reading about over the past several months. Interesting stuff. 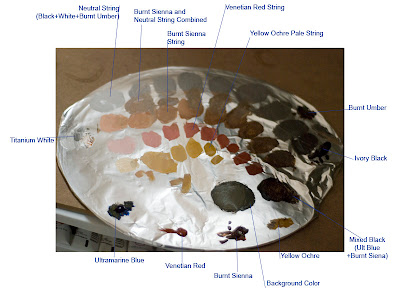 Here's my palette set up, already part way through the painting. The lighting wasn't very good when I took this and I wanted to avoid flash, but I will take a better picture next time I set up my palette this way. 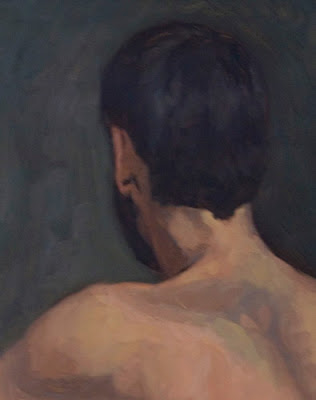 Anyway, I wanted to really just focus on the above as my composition. However, I only had an 11x14 or 5x7 panel to choose from, and I felt stretching that to 11x14 would be too big. So, I did focus on that area, and then at the end of class rushed to sketch in the rest. 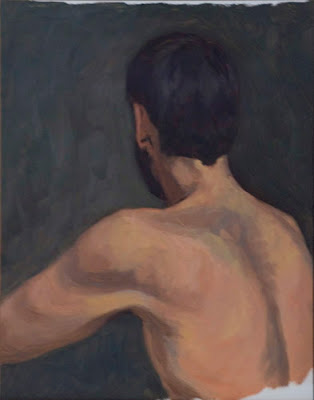 Even though I am not totally happy with the paint outside of the cropped area, it was a good session for me. I took a picture to use as reference since this model is *on tour with his band* and thus will not be available to model again soon. Perhaps I will get a chance to bring this one up to a finish.
Posted by Lacey at 5:47 PM

Hey, you are working, being a teacher, guiding the hands and eyes of your class, being a good Mom, and trying to do your own work? Wow. You have set quite a pace. All this and the Holidays too? You may just need to take a break and get away from all of it... All Of It for a few days to just be. Don't lose sight that the arts are an exploration and discovery, which take time. Don't push yourself too hard... OK?

You are doing so much, lady! No worries and don't forget to take a vacay from the craft every now and then. The painting looks fantastic :)