Thoughts on My Bias Towards the Female Form 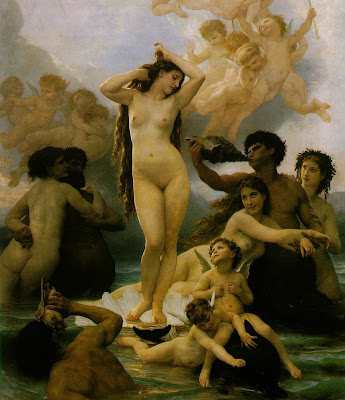 I don't usually delve into the thoughts behind my work on this blog, but today I am taking the leap in doing so. Thank you for those who commented on my portrait of Seamus, and brought up the issue of adding the male figure to my work. It has come up more than once over the years that my work is almost exclusively of the female form, and to date the only men that have made appearances in my formal work are or have been murdered by women. I am sure this has prompted many to speculate on certain aspects of my psychology, as various Freudian theories could be applied, but for now I thought I'd explain my bias as I see it.

The first and foremost reason that I focus so much on women in my work is simply that I am a woman myself. I am often seeking to express an idea or emotion that is mine, and it is difficult for me to try and 'speak' through a male image. I'm not a male, and therefore I don't so much think or feel from the perspective of a man. Many ideas are universal and are experienced by both sexes, that is true, but there is still a difference in the way men and women experience life, and therefore the gender of the person in the image has an affect on the way the message comes across.

For example, in my painting, "Insecurity," and it's companion, the nearly finished "Security," try to imagine the same compositions, but with men inserted in the women's places. In my mind, at least, the paintings wouldn't make sense and would even seem silly... I mean, men in general aren't that self-conscious about themselves, or at least they aren't perceived that way in society and in my experience don't behave the same way as women when they are in the buff. Perhaps it is sexist for me to assume these things, and of course I know that men can and often do have body-issues as well, but I still can't generally seem to wrap my head around truly expressing myself through the male image.

Slightly unrelated, I have had more than one conversation lately about male and female bodies in pop culture vs in fine art. It almost seems like the standards are reversed in each situation. In pop culture (even with TV news anchors, etc.) it is OK for men to have a sub-ideal body, so long as they have the personality and sense of humor to make up for it. Women, however, tend to need to be very thin, regardless of if they are a singer or a comedian. In fine art, though, quite a variety of feminine forms are and have been considered beautiful while throughout history only one real male body-type has been preferred by artists.

Edit: After I wrote this post, I found this image on my Michelangelo search... it is supposed to be an image of what the sculpture David might look like it done after a modern-day American model. Of course, it was done as a commentary on today's obesity 'epidemic,' but I think it also goes along with my point, above.

In closing, I have been planning for a few years to add the male form to my body of work. I do have a handful of paintings that I have had sketched out for some time, but have yet to be started. Stay tuned and these may appear in the near future. And no, the men in these new compositions are not there merely for the women to murder! However, it is going to be a real challenge for me to get past something purely academic in these pieces, for the reasons mentioned above. Also, for those that asked, yes, there will be more of Seamus soon. I have been drawing live from him this week, and am about to head out to the studio to finish up. I have yet to learn how to create an expressive pose with the male figure like the images in this post, but perhaps over time I will become more comfortable with the male subject and something will click.

I think you're absolutely right on all counts, especially that men have a naturally more utilitarian form. Therefore seeing them supine or passive is kind of strange. Like "Why aren't you doing anything?" I like Bernini's "David" or any of the "Rape of the Sabine" paintings, because they're active and I think activity shows off the male form to the best advantage, what with all the hunky muscles and everything :)

I did wonder why the male figure was not represented in your work - especially since you are talented with the female form. Focusing upon one gender and not the other seems to be only one side of a story. Being a female I can relate to your comment concerning the difficulty in trying to "speak through a male image" - no easy task I am sure. I also agree with your comment on a variety of feminine forms being quite accepted in art works throughout the ages, while the male "utilitarian" form has or mostly has only been one body type. That does seem sad to me. I feel artist should not rely on the beauty of the form to carry their work, but on the beauty of the expression within the forms to shine through; nudes do not have to be overly posed or particularly exceptional in their physicality, but it is in a sense of normality that I feel a work is special. Use of average models, people we see everyday in real life, gives the images a very personal touch; Making them enjoyable subjects of the male form with the "muscles on display" effect found in so many paintings and drawings of the past.
Focusing on the male body from a woman's perspective falls into a minority of artists. Taking the male figure and finding a way to capture and show what you see beautiful about it to all looking at your works is a hard tasks. In your style (which I find to be soft and a bit classical) this should not only enhance it and not detract from the masculine qualities of the male nude. In some of your work, I do appreciate how you have focused in on the same and specific details - it elicits from the viewer the sense of that close intimacy of being with a partner and knowing every fine detail about them. I am sure will do fine if you do decide to venture forth with male subjects. Many of us familiar with your current paintings know your are already doing a fine job with the female side. Thank you - a new fan.

Bethany- I think you are right about men working well in active poses. Hmm, food for thought.

Sara- Thank you for such a thoughtful comment! You have given me a lot to think about, especially the possible relationship between my painting style and how it would meld with the male subject. Stay tuned, and we'll see what happens!

Hello again - just a correction to my earlier post, I re-read my post and noticed that I meant to type
"...making them subjects of the male form WITHOUT the "muscles on display effect..." (sorry about that).
I will be glad to "stay tuned" I enjoy your work thus far and would very much like to see where it all goes as time goes by. Thanks.