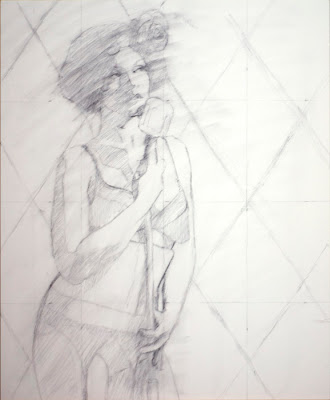 I've started, yes, another painting of the lovely Annie Cherry. I started off by dividing the 20" x 16" panel into sections (divided it in half both vertically and horizontally, and then divided those sections in half as well) to help with placement. Then I used a reference photo similarly divided and started having at it with charcoal pencils, much in the same way I work when I draw from life. Once I had things laid out relatively well I hit the whole surface with a soft brush to lightly smear the drawing and get rid of any dust on the surface. 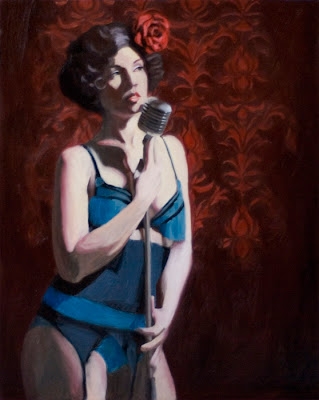 I spent a day laying in the whole composition with undiluted paint applied thinly, focusing on broad, flat areas of color. I do put in some indication of major hue changes but mostly I try and clearly divide the light and shadow halves. The background pattern was not drawn before painting. In retrospect it would've been easier had I made a stencil. After all was done I used a small soft brush to get rid of any hard edges. 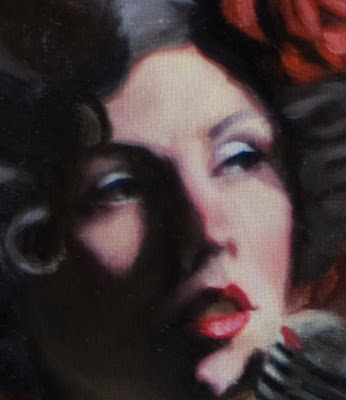 I had an hour or so yesterday to work again, so I started laying in some of the hue-changes in her face. There's still much to do, and likely lots of corrections to make, but it's progress!
Posted by Lacey at 7:10 AM

i love it!! gorgeous.

I have not seen as many of your preliminary drawings for your paintings. I really enjoy them. The painting is lovely and elegant.